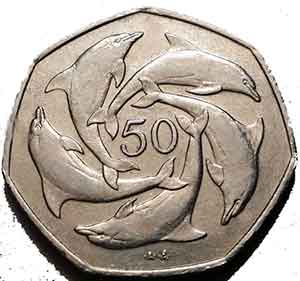 The 50p Dolphin coin was issued in Gibraltar. As the Royal Mint does in the UK, other British territories also issue their own special coinage and while it isn’t normally legal tender in the UK, it is often exactly the same size and weight as UK coins so sometimes they can turn up in your change. The coins features a design of five dolphins swimming around the number 50. It’s a really nice design and very popular with coin collectors.

The following are old coins that we found based on the rare coin search terms that you entered which were as follows: 50p Dolphin. This is a commemorative 50p that was issued in Gibraltar, not in the UK. However, there is always a chance that one might turn up in your change here in Great Britain so keep an eye out for one.

What is a Dolphin 50p coin worth?

Get more information by clicking on the title below. Be aware aware that some Dolphin 50p editions may have been struck especially for coin collectors and might be silver (or even gold) special editions that were never put into circulation. Regular coins that have been put out into circulation to spend will also vary wildly in condition from those that were hardly used and sat in a drawer for many years through to other examples that may have been spent and banked hundreds or thousands of times in their lifetimes.