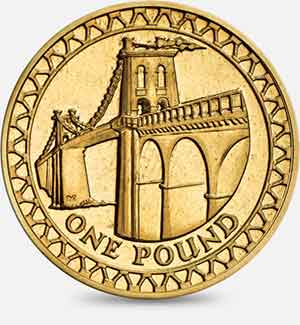 This 1 Pound 2005 Bridge coin features the Menai Bridge in Wales which was engineered by Thomas Telford. This was the second in a set of four £1 coin designs released that year, one for each part of the UK. This one of course is to celebrate engineering in Wales. The bridge was completed in 1826 and is a grade 1 listed building. It connects Anglesey to the mainland.

How many 2005 Bridge coins were minted?

According to the Royal Mint, 99,429,500 of these coins were made. That’s quite a lot so there is a good chance of finding one of these when you check your change.

Here at Rare British Coins you can find loads of superb coins, tokens, banknotes and coin collectables from England and Britain, including Roman England.

Here are sought after and precious genuine coins for sale that should match your requirements based on the words that you entered which were as follows: 1 Pound 2005 Bridge. To be sure that you are comparing like with like, make sure you take into account whether you have a regular coin or a special edition (for example, a proof coin, one that was minted with a special mirror like finish which hasn’t been put into circulation). There may be different types of 1 pound Bridge coins out there.

What would you have to pay to buy a Menai Bridge pound coin ?

Click any listing below for full details and to get a feel for value of your  1 Pound 2005 Bridge pound coin. The rarest editions of this coin appear to be those with a minting error. Error coins are always especially sought after by coin collectors. Otherwise, the condition of the coin will usually be the most important factor in establishing its value when sold.

Check these out on Ebay now